See How Canadians Have Aged Since 1971 from Visual Demographics Dashboards

July 26, 2017
My latest Tableau project involves Canadian population demographics. Statistics Canada has estimates publicly available with many age groups, both traditional genders, and all the provinces and territories, for each year from 1971 to 2016. It's a lot of data which is not only cumbersome to manage and use, but hard to visualize without a lot of work. Well, Tableau enabled me to change that so here are some of the initial offerings. I will write more as I create more interfaces with different ways to organize and/or access the data.

First up is your common scatterplot by single age years. The default view is for all of Canada, both genders. You can see the bump that is the baby boom now in their mid-50s to late 60s, hitting 70. That break in the smooth curve at 70 was 1946, after all the soldiers returned home and people started having babies again. The war ended in late 1945 so give 9 months for birth and you got the boom in 1946 that is a massive jump from 1945.

If you slide that slider at the top right all the way back to 1971 and click through the arrow buttons to advance the years, you can see the baby boomers aging with time from that bump and gap moving to the right with older age. Those dotted lines for median ages of genders should confirm the aging as well.

You can do this for all the provinces, or any groups of provinces, and see it to be true. The territories don't have the typical profile of people of Western society, with a greater share of First Nations people who lead a different lifestyle, so their population profile change isn't quite the same, but there's still a lot of similarities.

Otherwise, you can see the typical trend in a slightly greater share of males till about 25 when stupidity to remove themselves from the evolutionary progression, and other factors that keeps the male life expectancy shorter than the females', reduces their share of the population to be less than that of females. Also true for the provinces and less for the territories due to the same reasons above.

And with all the dots, hover your mouse cursor over them to see the population number, with note on which age and gender to be clear among the clutter of graphed points.

But that's just one jurisdiction and demographic at a time you're viewing. I also built one for two jurisdictions and/or demographics to compare, on a common time scale that you change to animate through the years.

You can really compare visually here as you don't have to remember what another profile looked like. A little detail is sacrificed, but not enough to make the graphs useless. But what you get in return is definitely worthwhile.

If you prefer bar charts to see how much of the entire population males and females make up, there is this bar graph. You can move this graph with time, and also change other variables.

And for a comparative look, there is a two graph version of the above, like with the scatterplot above. You can also change time on this graph, along with other variables.


Next time, I'll talk about the trends for average populations, and how single demographics have changed with time. There, different generations pass through a single age or age range, rather than following groups of people (as generations) as they age.
age Canadian Canadian population demographics gender groups Population Statistics Canada years 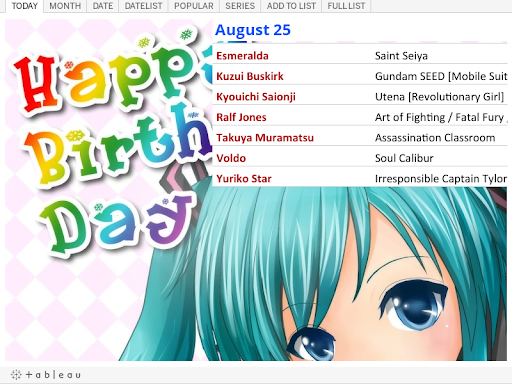 This is a Tableau visual or "viz" with birthdays of over 1875 anime and manga characters, grouped and accessible in many ways which I will show you below. However, I know there are still many missing. I will show you how to identify some of them so if you were interested in getting me new characters and their birthdates that I can add to the list, please leave them in the comments. Otherwise, just have lots of fun with this in some of the ways I'll describe below, among others you can find! You can navigate within any of the windows below to access anything the set of dashboards within the viz offers. I just created one window for each dashboard to have a picture of what I'm talking about in describing each dashboard, close to the text to help with reading. TODAY You came here for birthdays, so the ideal greeting is a list of which character's birthday it is today. I think the date mechanism is synced to the time on your browser so that someone ac
Read more 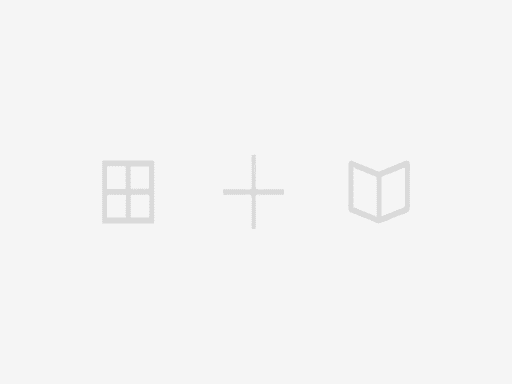 Results for the Canadian Community Health Survey, 2016 edition, was released in late September, 2017. I finally got around to putting it into a set of interactive Tableau report card dashboards to bring out the most telling information from the survey, which is comparisons to the national average in each year, and comparisons to 2015 results for the 2016 results. You can embed these dashboards into websites allowing for JavaScript below, like I did below, by clicking on the Share icon (third right in from bottom right), or send as a link. The embedding actually carries the variable values at whatever is set on the view you have when you grab the JavaScript, so you can leave the desired view on your blog and talk about it, rather than make the reader change the parameters so they can see what you were seeing when you wrote about it! Lovely feature! In these report cards, immediate visual results are shown as dots. Green dots mean (statistically) significantly better* results than th
Read more 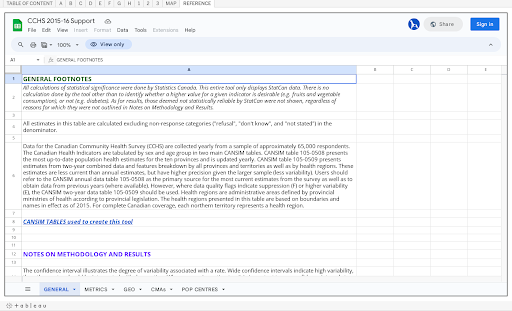 Results for the combined years 2015-16 Canadian Community Health Survey (CCHS) were released in early November, 2017... all of about 680,000 lines of it! It combined results from the individual years of 2015 and 2016 to allow for a larger sample so one could get statistically reliable results for geographies smaller than the provincial level. This was what is really useful and practical about it, for knowing where to focus to address public health issues that it can help with, since the problem is probably not an even distribution throughout a province. The following set of interactive, report card style dashboards on Tableau bring out the most telling information from the survey, which is comparisons to the national and provincial averages in each year. You can embed these dashboards into websites allowing for JavaScript below, like I did below, by clicking on the Share icon (third right in from bottom right), or send as a link. The embedding actually carries the variable values at
Read more